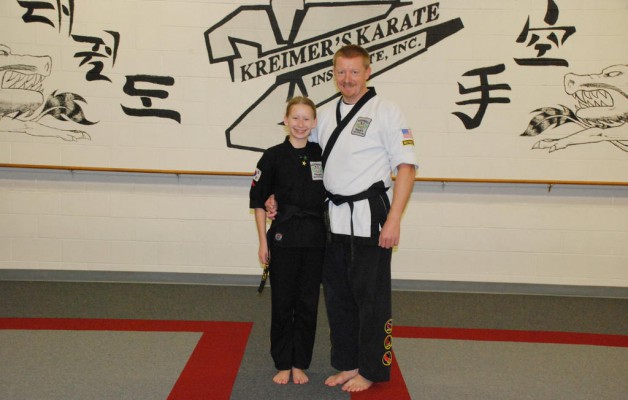 After 5 years of training came days Mette have looked forward to sidsen she was to pretest for her “Black belt” trial last fall.

The last three weeks have passed with intense karate training 3 times a week, and sometimes on weekends to be ready for the final black belt test held Sunday 8 November, 2015. Saturday afternoon and Sunday morning before the sample was the last details fine pus and rehearsed in the basement. It was a clearly nervous Mette who were going to try all alone, you. Torben had to participate as a judge and thus sit in dommerpanellet. But it is not the same as had a family by her side on the floor. Mette passed the test with very pleasing results and grades.

A tired group of karate students who have just completed one 4 hour karate trial. They are now waiting for their name being called out and have assigned their new belts, and karaterer.

Mette help of tying the new belt, when the English text should be on the left side where we have the American flag on his uniform.

En glad Mette som nu kan smile igen. The test is over and Mette can leave the room as Black belt with all her karate weapons.

Group photo of the entire team which was to karate trial. All passed with impressive results.

father, "biker", strength of promises, karate instructor, photographer, are just some of the labels that you can put on me. In my everyday life, I have the pleasure of working with industrial automation, and thus managed to make my hobby electronics and computer engineering my job.

The end of the outdoor sports session celebrated with a "Home Coming" celebration at the High school is. Trine og Nick havde besluttet at de i år ville...read more →

Mette with the job

Today is a special day for Mette as schools in the municipality of Fredrick holds "Bring your child to work day", or translated "take your child with ...read more →

This site uses Akismet to reduce spam. Learn how your comment data is processed.